The Artists of the WE SPEAK Festival
By Gracelynn Shibayama 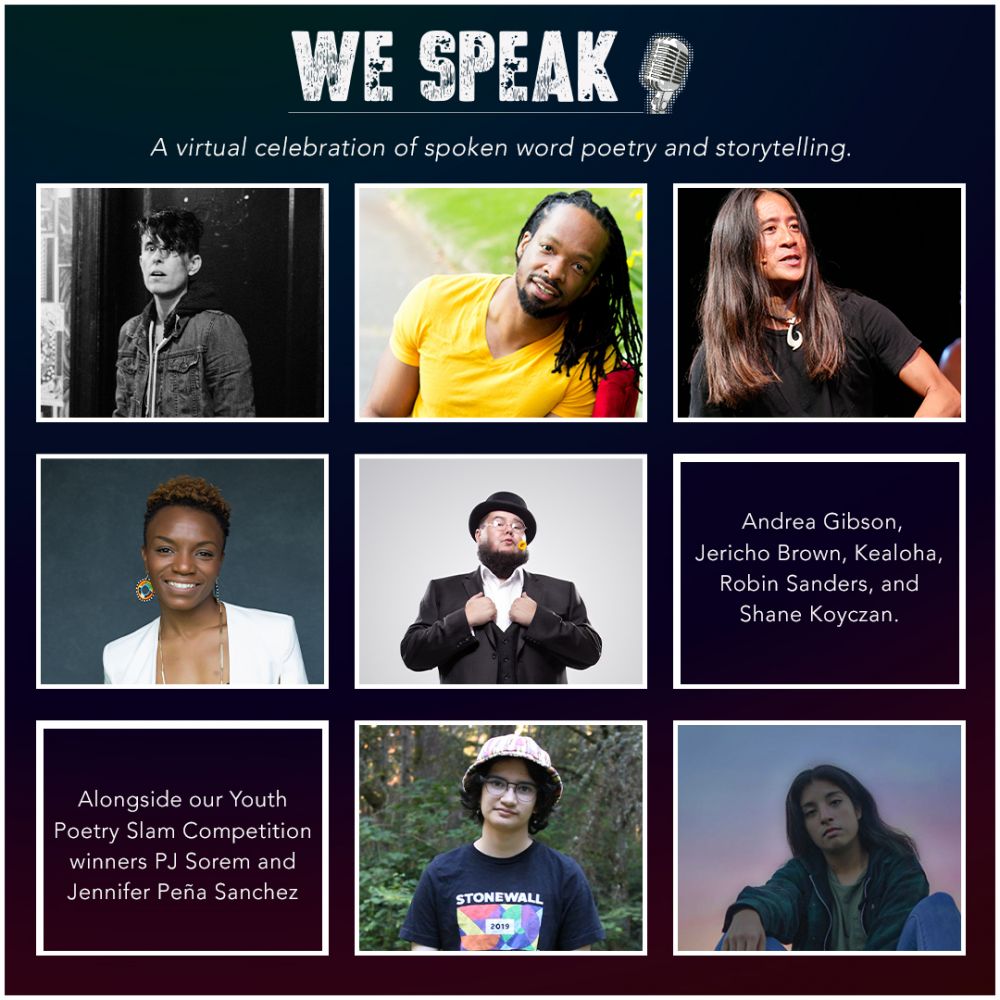 2020 has been one of the most trying years we’ve experienced as a nation and around the globe. We’ve struggled with a pandemic that has reconstructed our lives as we know it. We’ve called attention to the racial justice movement that is working toward removing the dark shadow cast over the lives of so many in our communities. We’ve dealt with the constant struggles of accessibility in all walks of life and brought to light many causes that are worth fighting for but often underrepresented. And yet, even in these difficult times, we continue growing and learning from each other.

It’s amidst this landscape of challenges and revelations that Edmonds Center for the Arts (ECA) presents the first-ever,WE SPEAK Festival a virtual celebration of spoken word poetry and storytelling on December 3, 2020. An event that seeks to embody the complex themes of the year 2020 while creating a safe, collaborative space for both aspiring and critically - acclaimed artists to Speak.

Through performance, artists are invited to respond to issues including (but not limited to) the global health crisis, Black Lives Matter and the racial justice movement, and experiences of disability, Indigenous, and LGBTQ+ communities.

Jericho Brown (he/him/his) is the author of three collections of poetry: The Tradition (2019), a finalist for the National Book Award, and the winner of the 2020 Pulitzer Prize for Poetry; The New Testament(Copper Canyon 2014), winner of an Anisfield-Wolf Book Award and named one of the 'Best of the Year' by Library Journal, Coldfront, and the Academy of American Poets; and Please (New Issues, 2008), winner of a 2009 American Book Award.

Of his most recent collection The Tradition, The New York Times Book Review says: "In Brown's poems, the body at risk — the infected body, the abused body, the black body, the body in eros — is most vulnerable to the cruelty of the world. But even in their most searing moments, these poems are resilient out of necessity, faithful to their account of survival, when survival is the hardest task of all:" So the Bible says, in the beginning, / Blackness. I am alive.

"There are countless poets of the body, but the body in Brown,s poetry serves as a nexus of the corporeal and conceptual. The "body" of his work isn’t just a physical, individual one; it's a stand-in for various (flawed) institutions of power and belief: national history, religion, mythology, the justice system." — New York Times

You can read more of Jericho Brown's poetry here: https://www.jerichobrown.com/

Andrea Gibson (they/them/their) is one of the most stirring and influential spoken word artists of our time. Best known for their live performances, in which they regularly sell out large capacity rock clubs and concert halls, Gibson has changed the landscape of what it means to attend a "poetry show" altogether. Gibson's poems center around LGBTQ issues, gender, feminism, and mental health, as well as gun reform and the dismantling of oppressive social systems. Their live shows, in which they are often accompanied by musicians, have become loving and supportive ecosystems for audiences to feel seen, heard, and held through Gibson's art.

Gibson is the author of six books. Lord of the Butterflies (Button Poetry), which sold almost 20,000 copies in its debut year, was the winner of the Independent Publisher's Award in 2019 as well as a Goodreads Choice Awards Finalist. Take Me With You (Penguin, 2018), an illustrated collection of Gibson’s most memorable quotes, was also a Goodreads Finalist. In 2019, they co-authored their first-ever non-fiction book, How Poetry Can Change Your Heart (Chronicle Books). In addition to their publishing accolades, Andrea has released seven full-length albums, combining their socially active spoken word with musical collaborations. They are the winner of the first-ever Women’s World Poetry Slam Championship (2008) and a frequent World Poetry Slam Finalist.

You can read more of Andrea Gibson's poetry here: https://andreagibson.org/

Kealoha is the first Poet Laureate of Hawaii and the first poet in Hawaii's history to perform at the governor's inauguration. He has performed around the globe from Brazil to Switzerland including the White House and the 'Iolani Palace. Kealoha was selected as a master artist for the National Endowment for the Arts program and received a Community Inspiration Program grant from the Native Arts and Cultures Foundation. He was honored as a "National Poetry Slam Legend" in 2010 and has represented Hawaii at the National Poetry Slam for 7 years running, making it to the finals 4 times. In the genre of storytelling, he has gained national recognition by showcasing at high profile events such as the National Storytelling Network Conference, the Bay Area Storytelling Festival, and the Honolulu Storytelling Festival.

You can read more of Kealoha’s poetry here: http://www.kealohapoetry.com/

Internationally recognized author and spoken word artist Shane Koyczan has emerged as a creator of poetry that dares to belong to the people and speak directly to them in their own voice. His poems use personal narrative to spotlight social justice issues, mental health issues, and love. His debut collection, Visiting Hours (2005), was selected by the Guardian and Globe and Mail as one of the best books of 2005. His autobiographical novel in verse, Stickboy (2008), is being adapted for the stage by the Vancouver Opera. Koyczan is also the author of the collections Our Deathbeds Will be Thirsty (2012) and A Bruise on Light (2014).

Koyczan has received a BC Civil Liberties Award for the Arts for his social justice work related to anti-bullying. The video of his anti-bullying poem, “To This Day” has over a million views. Koyczan has given a TED Talk on bullying and created a free anti-bullying smartphone application as part of his To This Day Project.

You can read more of Shane Koyczan’s poetry here: https://shanekoyczan.com/home

Robin “Bino” Sanders is a profound performing and visual artist, educator, writer, and speaker. Her imaginative works include both audible imagery making and kinetic storytelling. Sanders’ body of work includes speaking, teaching, and choreographing at a host of dance schools and notable organizations such as Bates College, Bowdoin College, Colby College, Seattle’s Velocity Dance Center, and many more. She has toured the country as a performer, writer, and creative director for Love Heals All Wounds, an evening-length dance performance interwoven with spoken word and original music. Her work with Love Heals has been highlighted in L.A. Times, New York Times, and Miami Herald.

Sanders is also producing a new work entitled Love Is The New Black (LITNB). This work celebrates newfound love and freedom that encounters negative images and rhetoric associated with BLACK life. Currently, Sanders is the creative director of Art of Family and Movement Church where she develops and implements unique arts and education programs & services to meet the specific needs of individuals, families, and the community.

You can learn more about Robin Sanders here: https://outloudartistry.wixsite.com/binothepoet

PJ Sorem is a 17-year-old student, poet, and activist from Tacoma, Washington. They are genderqueer, mixed Filipino-American, and use they/them pronouns. They are passionate about using writing to express the raw experiences and emotions that shape their life.

Jennifer Peña Sanchez has been writing poetry since she was 13 years old. Writing has always been an escape for her. What inspired her to write her WE SPEAK Festival piece was God and the truth that is the bible.

Don’t miss these incredible performances on December 3. Tickets are pay what you choose, $5-$45 and ON SALE NOW.